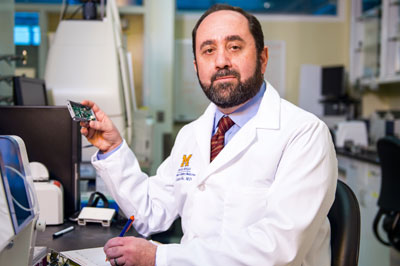 MTRAC Awards are a part of the MTRAC for Life Sciences Innovation Hub – a statewide program that accelerates the transfer of technologies from Michigan’s institutions of higher education to the private sector for commercialization. Made possible by the Michigan Economic Development Corporation, and co-managed by FFMI and U-M Office of Tech Transfer, the awards provide mid-stage, translational research funding and resources for proof-of-concept and late-stage translational studies with a high potential of commercial success.

MTRAC Awards offer funding up to $150K, with all awarded projects requiring a cost share from the investigator/institution. They are given once a year in January, with the call for proposals deadline in October. Award winners receive regulatory guidance, business plan development, and mentorship from industry and investment experts.

Projects funded by MTRAC Awards enhance the internal innovation pipeline for long-term success in commercialization. And while invention reports and IP licensing are important milestones for MTRAC projects, positive impacts to human health – as well as job creation – are the ultimate measures of success. We invite you to browse our portfolio of successful projects and faculty innovators.

What is the process for submission of proposals?

Proposals will be accepted from investigators at any Michigan institute of higher education, non-profit research center and hospital system.

The MTRAC for Life Sciences Innovation Hub offers two funding tiers – Kickstart awards offer early-stage funding in the $25K-$30K range, and MTRAC awards offer mid-stage funding up to $150K. Kickstart awards are given twice a year, with proposals for these early-stage awards due February 1 and August 1 of each year. MTRAC awards are given once a year, with proposals for these mid-stage awards due in October.

The MTRAC for Life Sciences Innovation Hub is using the University of Michigan’s Competition Space to manage the proposal submission process for both Kickstart early-stage and MTRAC mid-stage awards. Proposals will be evaluated on the basis of scientific-merit, potential health care impact and significance, the potential for commercialization, and the likelihood of obtaining further support. It is highly recommended to contact Bradley Martin, Ph.D., Director, Fast Forward Medical Innovation, at bradmart@umich.edu or 734-936-8577, to discuss your proposal before submission.

What kind of projects will be funded?

Project budgets depend on the scope of work and technology. Funds dispersed depend on achievement of prospectively agreed upon milestones, which are project specific. Previously funded Kickstart proposals range in budget from $25K to $30K , and MTRAC proposals have ranged from $100-200K .

What can the budget go toward?

The budget amount can be used towards research and development materials, supplies, and equipment; animal purchases, housing, and care; contract and consultancy services; and salaries. Large capital equipment purchases and tuition support are not allowed. The total amount of salary support requested will be considered when analyzing the competitiveness of each proposal. Salary support is expected to be less than 25% of the total budget. Limited exceptions to this guideline will apply, such as when extensive software development is required.

Who will determine what projects are funded?

The MTRAC for Life Sciences Innovation Hub Oversight Committee comprises global biotech business experts, as well as leaders in translational science and tech transfer from the participating institutions across Michigan.

The review process consists of multiple steps. An internal triage committee performs an initial review of proposals for eligibiity, selecting those that have significant commercial potential and appropriate stage of development for review by the Oversight Committee. Projects which are not selected for further review are provided with feedback, and often redirected to apply for Kickstart early-stage funding.

Then, the selected proposals are reviewed by the Oversight Committee, and a subset of proposals are selected for an in-person pitch presentation for funding. These pitches occur at the committee’s annual meeting in Ann Arbor in January, and awards are granted shortly thereafter.

What further role will the MTRAC for Life Sciences Oversight Committee play?